Ladies and Gentlemen, The Lost Girl of Astor Street is officially released today! This definitely means that I'm doing my happy dance. If you haven't ordered this wonderful book yet, please go do so right now! You don't want to miss this one, I promise.

In celebration of the book release, Stephanie put together a scavenger hunt for you, the readers. Once you've collected all the clues and reached the last post, you'll be entered to win a signed copy of the book! How cool is that?! 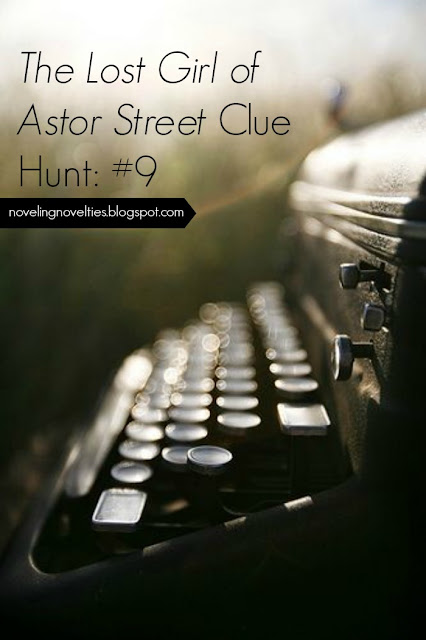 Today, I'm stop number 9 on the hunt and I have something very special for you. Stephanie has very graciously agreed to answer some questions about the book in an interview today.

Stephanie Morrill is the creator of GoTeenWriters.com and the author of several young adult novels, including the historical mystery, The Lost Girl of Astor Street. Despite loving cloche hats and drop-waist dresses, Stephanie would have been a terrible flapper because she can’t do the Charleston and looks awful with bobbed hair. She and her near-constant ponytail live in Kansas City with her husband and three kids.

Q: What gave you the inspiration for this lovely novel?
A: My initial idea for The Lost Girl of Astor Street came while I was putting away laundry, of all things. My mind was wandering (as it often does during chores), and I started thinking about different stories I like. I thought about Veronica Mars for a while, and then something triggered a thought about Downton Abbey, and I thought, “I wish there was something out there that was like Veronica Mars but in a Downton Abbey kind of setting. Oh, maybe I could do that!”

Q: The clarity of Piper's character came through quite strong as the novel developed... Have there been any people who have provided inspiration for Piper's character?
A: Thank you! I had so much fun writing her. Early on, she felt a bit like I was writing Veronica Mars fan fiction, but by the end of the first draft she had definitely developed her own personality. The only direct influence from my real life came from something my friend Kelli once told me. She said she hates slow dancing because she always tries to lead, and I thought, “That’s so Piper!” So I put it in Piper’s mouth.

Q: What is your favorite part about this time period/era to write about?
The 1920s is so unique because it’s bookended by major historical events (World War 1 and the stock market crash/Great Depression). Plus there were so many political changes happening, like women having won the right to vote and prohibition going into effect. Just with these events alone, I think there are endless story possibilities!

Q: What was your ideal writing situation for this novel? (Favorite writing food, beverage, music, setting, etc.)
This novel took so long to write and edit, that I did a lot of the work during two separate writing retreats. I finished the first draft sitting next to Roseanna White, which is appropriate because she was so helpful and encouraging when I said I wanted to write a historical. And then I did a ton of my edits on a retreat in Lake Tahoe with Jill Williamson and Shannon Dittemore. Other than that, I was in my office with a growing pile of research books and a cup of coffee!

Q: Did you find this idea easy to develop?
My enthusiasm was easy. I had never been so excited about a story idea. But turning my idea into a finished product was very difficult!

Q: What has been your favorite experience in writing, publishing, & promoting The Lost Girl of Astor Street?
A: The first time I held my hardcover book was when my editor handed me hers and asked me to sign it. We were at the American Library Association Midwinter Exhibit, and my publisher invited me there to to promote the book. That was a pretty incredible experience.

Q: Who is your favorite character in this novel?
A: It’s probably a bit silly to pick Piper as my favorite character, but I loved writing her. The way she saw the world was really interesting and enjoyable for me to write.

Q: A lot of people are probably asking this, but based on the last line of the book, is it safe for us to hope for more of Piper Sail in the future?
A: I have not signed a contract for another Piper Sail book, but I would love to write one in the near future. But I want it to be the right kind of sequel, so I’m being patient with it.
-

A huge thank you to Stephanie for stopping by, answering my questions, and putting my curiousness to rest :)

Remember to order your copy of the book today!

In case you missed the rest of the hunt, here's the schedule and the links to the other clues:

I read every single comment that you leave for me; they never fail to make me smile!

Hello, world. I'm Petra Grace, and it is so very lovely to meet you.